Supreme Court Case to Watch: When and How Copyright Registrations Can Be Invalidated for Inaccuracies

Elizabeth H. Cohen
,
Ricardo Fischer
,
Lindsay Korotkin
Share This Page
Last week the Supreme Court agreed to hear the case Unicolors, Inc. v. H & M Hennes & Mauritz, LP, which considers when inaccuracies in a US copyright application can be used to invalidate a resulting registration.
On

The case focuses on a fabric print copyright infringement dispute brought against retailer H&M by a California-based fabric design company and well-known copyright plaintiff Unicolors, Inc. The jury initially found in favor of Unicolors and issued a damages award of over $800,000 against H&M. While the lower court reduced that award down to under $300,000, it also rejected H&M’s post-trial copyright invalidity arguments without seeking any input from the Copyright Office. On appeal, the Ninth Circuit reversed the decision and agreed with H&M that the asserted registration contains inaccuracies that may support invalidation under Section 411 of the Copyright Act, 17 U.S.C. § 411. The appellate court thus instructed the lower court to reconsider the threshold validity issues, but only after it complied with Section 411(b)(2) by asking the Register of Copyrights whether it would have refused the registration if it was aware of alleged inaccuracies in the claim of a single unit group of works with a singular first publication date.[i] The district court complied and inquired of the Register of Copyrights in September 2020 and April 2021, but the Office has not yet responded. Interestingly, the Supreme Court’s decision to review the case comes in the midst of that procedural stall, which will now undoubtedly continue until the higher court’s decision issues in late 2021 or 2022.

The specific question presented by Unicolors that the high court will review is: “Did the Ninth Circuit err in breaking with its own prior precedent and the findings of other circuits and the Copyright Office in holding that 17 U.S.C. § 411 requires referral to the Copyright Office where there is no indicia of fraud or material error as to the work at issue in the subject copyright registration?”[ii] At stake is the standard that courts and parties will need to follow in assessing validity challenges to copyright registrations. According to Unicolors, the standard should be intent to defraud, such that a registration should only be invalidated if an applicant knew the application contained material inaccurate information and acted in bad faith or intended to defraud the Copyright Office by concealing the correct information. On the other hand, according to H&M, the Ninth Circuit applied the proper standard of knowing material inaccuracies, such that a registration can be invalidated upon a showing that (i) the registration contains inaccurate information, (ii) the applicant knew the information was inaccurate, and (iii) the Copyright Office would have refused registration if it was aware of the inaccuracy.

The case is likely to have major implications for copyright litigants because, as we previously reported, registrations are a prerequisite to sue for US copyright infringement and to pursue statutory damages and attorney’s fees under the Copyright Act.[iii] And, not surprisingly, the validity of asserted copyright registrations is an oft-litigated issue.

Unicolors, Inc. v. H & M Hennes & Mauritz, LP involves a dispute between fabric designer Unicolors and major retailer H&M. Unicolors claims that H&M infringed its fabric print copyright by using an allegedly similar version of the print without permission in connection with a jacket and skirt first sold in 2015. H&M sold around 12,000 units of the accused garments. According to H&M, however, its fabric print is a different original design, created by a Chinese designer who drew inspiration from public domain designs and separately obtained a Chinese copyright registration for the print. 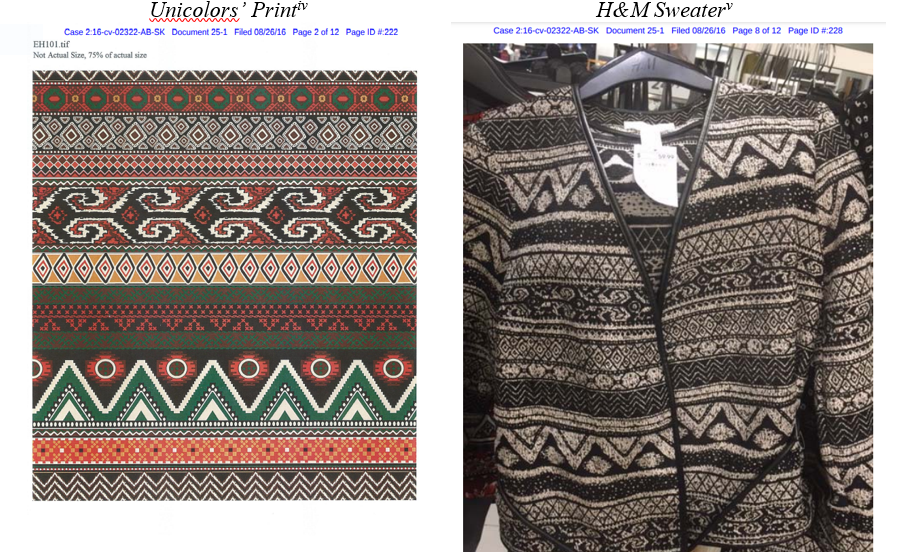 Shortly after the Unicolors print was created in 2011, the company included it in a single unit copyright application comprised of 31 works. The application claimed a 2011 year of creation date and a January 15, 2011 first publication date for all 31 works. The certificate of registration issued on February 14, 2011.

H&M claims the registration should be invalidated because the 31 works were improperly filed as a single unit with the same publication date even though 22 of them were allegedly published on one day and 9 were published on another day to different customers. According to H&M, Unicolors knowingly made the accused inaccurate statements to the Copyright Office in order to save money on copyright application filing fees.

The case was first tried before a California federal court jury, which found H&M liable for willful copyright infringement and awarded Unicolors $846,720 in damages.[iv] In connection with post-trial briefs, the court then reduced the damages award down to $266,209.33 and further awarded Unicolors $508,709.20 in attorneys’ fees and $5,856.27 in costs.

The court rejected H&M’s copyright invalidity claim raised in a post-trial motion for judgment as a matter of law notwithstanding the jury verdict. According to the court, H&M: (a) failed to show that the registered works were published separately such that the application had inaccurate information that, if known to the Register of Copyrights, would have caused it to refuse the registration; and (b) did not identify that Unicolors knew the application contained false information at the time of registration. The court also declined H&M’s Section 411(b)(2) referral request, which was made in a footnote to its post-trial brief, [v] making no reference to it in the written post-trial opinion.

On appeal, the Ninth Circuit reversed the district court’s decision, largely on the basis of technical objections to the court’s registration invalidity review process, and remanded the case for further consideration in light of its opinion. The Ninth Circuit found the lower court committed reversible error by failing to comply with the Copyright Act’s Section 411(b)(2) referral requirement and by improperly applying an intent to defraud standard to the invalidity question, rather than focusing on the question of knowledge of material inaccuracies. According to the circuit court, Section 411(b) of the Copyright Act requires that before assessing invalidity, a district court must submit a request to the Register of Copyrights “to advise the court whether the inaccurate information, if known, would have caused [it] to refuse registration” when a copyright-defendant “alleges that (1) a plaintiff’s certificate of registration contains inaccurate information; (2) the inaccurate information was included on the application for copyright registration; and (3) the inaccurate information was included on the application with knowledge that it was inaccurate.”[vi] It also reiterated its position that the correct standard to review copyright invalidity challenges is knowing material inaccuracies, not intent to defraud. In remanding the case for reconsideration of the threshold invalidity issue, the Ninth Circuit directed the lower court to comply with Section 411(b)(2) by first asking the Register of Copyrights whether it would have refused Unicolors’ registration if it was aware of the alleged inaccuracies.

The Ninth Circuit also disagreed with the lower court’s rejection of the substance of H&M’s invalidity argument. The appellate court conducted a textual analysis of the Copyright Office’s C.F.R. regulations and affirmatively held that “a collection of works does not qualify as a ‘single unit of publication’ unless all individual works of the collection were first published as a singular, bundled unit.”[vii] Under that interpretation, the court found Unicolors’ application contained knowing material inaccuracies because the 31 works were not initially published as a singular bundled collection. To support that finding, the court pointed to Unicolors’ president’s trial testimony, which established that he knew the 31 patterns were sold to different customers on different days, such that they could not have all been bundled and first published together. This appellate court finding laid the groundwork for invalidation of the registration, assuming that the Register of Copyrights confirms in response to the Section 411(b)(2) inquiry that it would have refused registration had it known of the inaccuracies.

The Request for Supreme Court Review

Unicolors urged the Supreme Court to review the case to correct what it believes are errors in the  Ninth Circuit’s interpretation of the scienter required to invalidate copyright registrations, as well as the court’s interpretation of the meaning of the first publication date. The Supreme Court only granted certiorari as to one of Unicolors’ questions presented,[viii] indicating that the review will likely focus on the procedural aspect of the Section 411(b) issue, rather than the threshold copyright invalidity argument as applied to the specific facts of this case.

[i] Section 411(b) of the Copyright Act states in pertinent parts that:

“(b)(1) A certificate of registration satisfies the requirements of this section and section 412, regardless of whether the certificate contains any inaccurate information, unless—

(A) the inaccurate information was included on the application for copyright registration with knowledge that it was inaccurate; and

(B) the inaccuracy of the information, if known, would have caused the Register of Copyrights to refuse registration.

[iv] The damages award was comprised of a large disgorgement of profits award and a smaller lost profits award.