Andrew M. Murad
,
Brian D. Schneider
Share This Page
A recent antitrust lawsuit filed against Zillow claims that the online real estate marketing giant has illegally conspired with certain brokers by agreeing to conceal the display of Zillow’s home valuation estimates, known as “Zestimates,” for the brokers’ listings on Zillow.com.

The five-count complaint, filed in New Jersey federal court, claims that Zillow’s agreements with some, but not all, listing brokers harms competition in the residential real estate market, and seeks damages and a permanent injunction requiring Zillow to display all for-sale listings on equal terms.

The case was filed by EJ MGT LLC (“EJ MGT”), the owner of an eight bed, ten bath 18,000 square foot mansion in Cresskill, New Jersey, that has been on the market since January 2017. The property is currently listed for nearly $7.8 million, but the Zestimate—which the plaintiff asserts is usually false or misleading—values the home at approximately $3.7 million. EJ MGT blames its inability to sell the property on the prominently displayed Zestimate shown on the home’s listing page on Zillow.com, which highlights the multi-million dollar discrepancy between the asking price and Zillow’s estimated market value.

Zillow publishes a webpage for each of the 100 million homes in its publicly-accessible database that displays information about the residence, such as its property tax history, lot size, public school district, and Zestimate. According to Zillow, the Zestimate home valuation is calculated using a proprietary formula that considers a variety of factors, including the home’s physical attributes, prior and current transactions of the home itself, and sales of comparable homes located near the subject residence. Although the Zestimate is intended to be only a “starting point in determining a home’s value and is not an official appraisal,” says Zillow, the plaintiff claims that it is an “often (if not always) inaccurate” valuation tool, and one that Zillow, itself, has acknowledged to be false or misleading.

According to EJ MGT, the inaccurate Zestimate “is prominently displayed” and “among the first pieces of information listed” on most property detail pages on Zillow.com. For many for-sale listings, like EJ MGT’s, the Zestimate is displayed immediately below the asking price towards the top of the page. But, according to the complaint, not all Zestimates are displayed in like fashion. Instead, EJ MGT claims that as a result of agreements with select brokers, Zillow allegedly conceals the misleading Zestimate so that it is “not prominently displayed and not in frame when an internet user lands” on the broker’s listing page. Although not named as defendants, the complaint identifies five brokerage houses, referred to as “co-conspirators,” that are allegedly parties to these Zestimate display agreements. 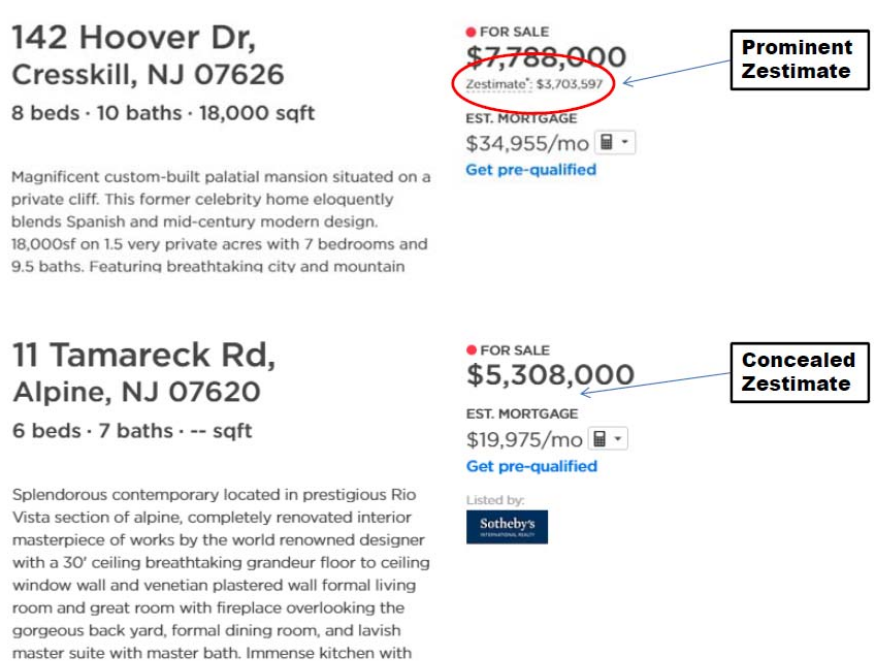 According to the complaint, when EJ MGT reportedly asked Zillow to place the Zestimate further down the property’s detail page, as it does for other listings, Zillow denied the request for equal treatment, claiming that its ability to change the display was subject to agreements between Zillow and select brokers. EJ MGT alleges that as a result of this disparate treatment, it has been unable to sell the property, claiming that buyers have been dissuaded from purchasing the home due to the great disparity between the asking price and the prominently displayed and misleading Zestimate.

The complaint asserts that Zillow abused its dominant position in the online real estate database market by unlawfully conspiring with select brokers to restrain the open exchange of home valuation information over the internet, in violation of federal and state antitrust laws. According to EJ MGT, brokers that are not parties to the Zestimate display agreements “are left with no choice but to have the inaccurate or otherwise misleading Zestimates appear prominently on those Residence Pages,” and are therefore unable to compete for listings against the co-conspirator brokers. The plaintiff also alleges that the Zestimate display agreements injure homeowners “who must pay additional fees to Zillow or brokers that are party to the Zestimate Agreements if they want to be placed on equal footing with the ... brokers and their agents who are able to have the display of the Zestimate on their listings concealed.” The plaintiff also challenges Zillow’s conduct under the New Jersey Fraud Act, and asserts slander of title and interference with prospective economic advantage claims under New Jersey common law.