The US Copyright Act does not provide protection for functional aspects of clothing. However, it is possible to obtain copyright protection for purely-decorative features of clothing that exist independently of an article’s utilitarian aspects, which is the heart of the issue the Sixth Circuit was grappling with. The 2-1 opinion in Varsity Brands et al. v. Star Athletica overturned a district court ruling which found that the decorative components of the uniforms were not “conceptually separable” from the utilitarian apparel such that copyright protection would apply.

The Sixth Circuit disagreed, holding that the chevrons, stripes, and other decorative elements of plaintiff Varsity Brands Inc.’s uniforms could be “identified separately from, and are capable of existing independently of, the utilitarian aspects of cheerleading uniforms,” thus holding that “Varsity’s graphic designs are copyrightable subject matter.”  Whether Varsity’s designs were copyrightable was a threshold issue that the court had to decide before determining whether defendant, rival uniform producer Star Athletica, had infringed on Varsity’s designs. Varsity Brands Inc. is the world’s largest producer of cheerleader gear. 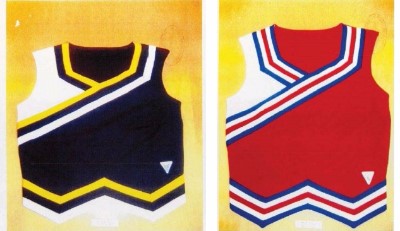 The majority was also careful to point out that its decision conformed to other courts’ treatment of the difference between “fabric design” and “dress design.” The former, which covers designs printed on a completed garment, have been treated by courts as pictorial and graphic features that can be identified separately from the utilitarian aspects of the garment. “Dress design,” on the other hand, “graphically sets forth the shape, style, cut, and dimensions for converting fabric into a finished dress or other clothing garment,” and has been deemed by courts to be inseparable from the utilitarian aspects of clothing (which is to cover and warm the body), and thus ineligible for copyright protection. Note that in this case, Varsity had successfully registered all five of the designs at issue with the Copyright Office.

The separability doctrine has long been used by courts to separate a useful article’s (such as clothing) functional aspects from its purely decorative components. It is not without its fair share of criticism, however, as evidenced by Circuit Judge David McKeague’s dissenting opinion, which declared that, until courts receive some “much-needed clarification,” either from Congress or the Supreme Court, “courts will continue to struggle, and the business world will continue to be handicapped by the uncertainty of the law.”

Judge McKeague’s dissent embodies many of the concerns that continue to bedevil the fashion industry when it comes to legal protection for clothing. In the absence of specific copyright protection for apparel, designers have resorted to more creative means, by applying a variety of intellectual property rights—design patents, trade dress, trademark, and copyright—in the hopes of securing protection for various aspects of their garments.